Later that day, Liam said, “Okay, any ideas about a shelter?”

“They taught us how to build one in Scouts,” Rupert said.

“All right, I assume you all want to stay together. So how about we make a guy shelter and a girl shelter right next to each other?” Liam said.

The thought of sleeping in the same shelter with a possible murderer creeped me out, but then, Rupert faced the same position alone. Still, creepier.

“Do you think you’ll need any help from an experienced shelter maker?” Rupert asked.

None of the adults answered, but Ginny said, “Yep.”

“All right. First, we need to find a tree to build against.”

The seven of us walked through the woods for a while, searching for a tree that would work. Caroline tripped, screamed, and then got up and said, “Oh, I think I sprained my ankle!” She limped over to Liam, grabbed his arm, and said, “Oh, Leo, I need help! I don’t think I’ll be fit to do anything strenuous like build a shelter. Can you help me get to the pool? I’m going to die of thirst! And I think water will do my wound some good.”

I rolled my eyes. Caroline wasn’t even bleeding.

Liam sighed, and then said, “I’m sure Daniella would be more suited to stay with you and let you rest.”

“Oh, but Leo, then you wouldn’t be there to protect me!”

“There. It’s all settled. Daniella’s pretty tough and she and Natalie will be glad to stay with you, won’t you, Daniella?”

Daniella glared at Liam, but she took Caroline’s arm and with more control than I would have managed said, “Let’s go get you that water.”

Daniella and Natalie put their arms around Caroline and helped her limp away.

I thought Liam did a pretty rotten thing, leaving Daniella with Caroline, instead of going himself but I didn’t blame him that much. Who’d want to spend time with her?

The three of us kids continued through the forest with Liam. I wondered if we had just left the murderer behind, or if he stayed with us. After about ten minutes of searching, we found a  tree that had several trunks coming from it  to build both shelters against.

“This is a great place. And it’s not super far from the water, either,” Rupert said.

“All right, kids, let’s go back and tell Daniella, Natalie, and Miss Whiny-Butt that we found a place,” Liam said.

We found Daniella, Natalie and Caroline at the water pool. Caroline gasped as we came up, and then put a hand on her heart and exhaled when she saw it was us. Daniella rolled her eyes.

“We found a good place for shelters,” Ginny said.

When we reached the spot, Natalie helped Caroline sit on the ground.

“Well, we should lean sticks or some tough grasses up against the tree, then fill in spaces with leaves and mud. Caroline could do the filling in,” Rupert said.  “And we could lay the life raft on top of the girls’ shelter for extra protection.”

“Okay, Daniella and Ginny, go with Rupert to get that life raft, and the rest of us will start gathering sticks,” Liam said.

Daniella sighed and jerked her head, I think, half nodding, and half flicking her black side bangs out of her eyes. I heard her mutter, “Can’t do anything without bossing me around, can he? Just like my ex-husband,” as they left.

Natalie, Liam, and I gathered sticks from the ground, but Caroline just sat there.

When Ginny, Rupert and Daniella returned, dragging the life raft, we showed Rupert the sticks we found. Rupert instructed in finding the best sticks and sent Ginny, Natalie, and Daniella in search of taller sticks. Meanwhile, Rupert and Liam leaned the sticks against the tree. Rupert told me to pile up some mud and leaves for Caroline. After I had a pile, Rupert told me to let the air out of the life raft so we could put it on top of the shelter. I found the air valves and opened them. Then I lay on my stomach on the raft to push the air out. Rupert proceeded to tell Caroline how to put the mud and leaves in the cracks. 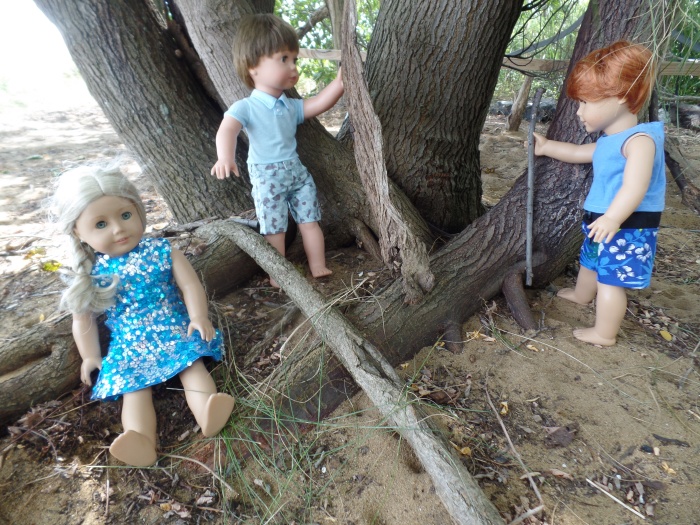 “Eww!” Caroline said when she picked up a glob of mud. She dropped it, splattering some mud on Liam’s boardshorts. He clenched his teeth, I think to bite back what he wanted to say.

Daniella and the girls came back with sticks and we continued building. We finished the shelters in about thirty minutes.

After we finished building the shelters, I felt so ready for bed, even though the sun hadn’t set. The heat could really drain you of all your energy. When I voiced this, Caroline exclaimed her exhaustion.

Pretty ridiculous, considering she did the least amount of work of all of us. She mostly had sat there and eventually Rupert and Liam finished filling in the mud.

Caroline went into the girl shelter.

“You guys come here,” I said to my sisters and led them away from everyone else. “I really want to go to bed, and I don’t want you guys out there alone when there’s a killer.”

“But Liam, Daniella and Rupert are still out there. If we stay with them, we should be safe,” Natalie said.

“Still, I don’t want you out with those creeps without me.”

“But Rupert’s not a creep,” Ginny said.

“No, but then which of the grown-ups did it?” Natalie said.

It seemed like sleep took forever to come. Despite how tired I was, I couldn’t get my mind to calm down. Aunt Lorelei was gone forever. She would never come over or laugh or listen to country music again. She would never hug me again. I missed her so much.